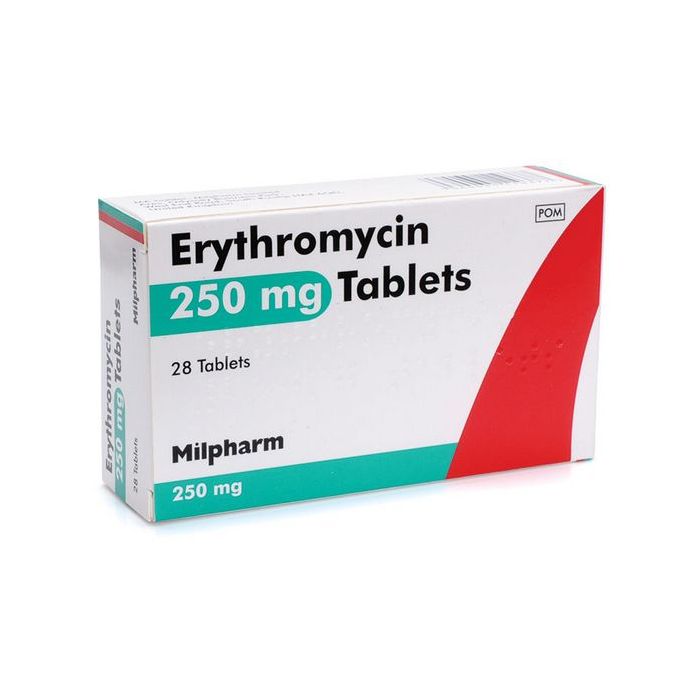 Erythromycin is a prescription-only treatment that belongs to a group of medicines known as macrolide antibiotics.

Macrolide antibiotics work by killing bacteria responsible for causing and spreading infection and can be used to treat acute and chronic infections.

It is prescribed for a range of conditions, including chest infections like pneumonia, skin problems such as acne and rosacea, oral abscesses, and sexually transmitted diseases.

Erythromycin 250mg tablets are typically prescribed to treat rosacea in people who are intolerant and unable to take other tetracycline antibiotics.

When you use Erythromycin to treat acne or rosacea, it may take up to 2 months or longer before you start to see an improvement in your symptoms.

What is Erythromycin 250mg used to treat?

Erythromycin is prescribed as a treatment for a variety of conditions. It is commonly prescribed for:

It can also help to treat scarlet fever and various other types of infections.

It can also be prescribed for children to treat ear infections and skin infections.

When using Erythromycin tablets to treat an infection, you should start to feel better after just a few days. However, as a treatment for acne or rosacea, it may take a few months for the problem to get better.

How does Erythromycin work?

Erythromycin works by killing and stopping the spread of bacteria responsible for causing infection. By preventing bacteria from spreading, erythromycin limits the surface area in which the bacteria can grow and spread, eventually killing the bacteria.

Who can use Erythromycin?

Erythromycin is an effective macrolide antibiotic medication which can treat a number of conditions. Nonetheless, it may not be suitable for everyone to use.

Do not use this treatment if:

Speak to your doctor before using Erythromycin if you suffer from myasthenia gravis.

When will Erythromycin clear my Rosacea/Acne?

For skin infections it may take up to 2 months of longer before yu start to see any improvement to your symptoms.

It is important that you continue to take your medicine as prescribed by your doctor, even if you feel better or your infection/skin has cleared up. Do not stop taking Erythromycin unless advised to do so by your doctor.

How do I take Erythromycin?

Swallow Erythromycin tablets whole with a drink of water. Do not crush or chew them.

It is recommended to take the tablets with food.

Try to space your doses evenly throughout the day, for example taking 1 tablet in the morning and one in the early evening.

Before using this medicine, please read the patient information leaflet which will also provide a step-by-step guide on how to take your tablets.

The recommended daily dose to treat Rosacea and Acne as per NICE guidance.

Common side effects affect more than 1 in every 100 people, they are usually nothing to worry about and will typically subside after a few days once your body has got use to the treatment.

Before using this medicine we recommend reading the patient information leaflet in order to familiarise yourself with all of the potential side effects you may face.

There are a number of prescription alternatives to Erythromycin, all of which treat rosacea in different ways.

Other commonly prescribed rosacea treatments include:

How to take Erythromycin

Our pharmacists and prescriber follow NICE guidelines when prescribing Erythromycin.

Always take Erythromycin exactly as instructed by your doctor. Read the patient information leaflet thoroughly and ask your doctor or pharmacist for advice if you are still not sure.

What if I take too much?

If you take more Erythromycin than you were supposed to, you are unlikely to come to any harm. However, you may be at risk of temporary side effects, such as hearing loss, vomiting, an upset stomach or diarrhoea.

Speak to your doctor or pharmacist if you become worried or if you or your child has taken more than one extra dose.

What if I forget to take it?

If you forget to take a dose, take it as soon as you remember. If it is almost time for your next dose, just skip the tablets you missed and continue to take the medication as normal.

Never take a double dose to try and make up for missing a previous one.

To ensure you do not forget to take Erythromycin, try to take it at the same times every day. Some people find it helps to set an alarm as a reminder.

Keep this medicine out of the sight and reach of children.

Do not store in conditions above 25C. Store the tablets in the original packet and keep it closed.

Do not keep using this medicine after the expiry date, which can be found on the packaging. The expiry date refers to the last day of the stated month.

What is Erythromycin used to treat?

It is prescribed for a range of conditions, including chest infections like pneumonia, skin problems such as acne and rosacea, oral abscesses, and sexually transmitted diseases.

Is Erythromycin good for acne?

Erythromycin helps to kill the bacteria responsible for causing acne. Erythromycin limits the spread of the bacteria, eventually killing it and reducing the main signs and symptoms of acne.

How long does it take for Erythromycin to work for acne?

Erythromycin will noticeably improve the appearance of your acne within the first 6 weeks of starting your treatment.

Will Erythromycin make my acne worse at first?

Erythromycin can sometimes make you acne worse before it gets better, particularly within the first 2 weeks of your treatment.

Is Erythromycin good for Rosacea?

Yes, Erythromycin is primarily used to treat Rosacea, it helps to kill and stop the spread of the bacteria responsible for causing Rosacea. Although Erythromycin can be used to help the symptoms of rosacea, it will not stop rosacea triggers.

Is Erythromycin an antibiotic?

Yes, Erythromycin is an antibiotic, specifically belonging to the macrolide antibiotics family of drugs.

Will my Rosacea return if I stop taking Erythromycin?

There is more chance of your rosacea returning if you prematurely stop taking Erythromycin and do not successfully complete your course. You should always complete your treatment course unless advised otherwise by your doctor.

Can I drink alcohol whilst taking Erythromycin?

Yes, there is no harmful interaction between Erythromycin and Alcohol.
Side Effects

Like all medicines, Erythromycin has certain side effects, although they will not affect everyone who takes it.

Contact your doctor straight away if you get any of the following:

Other side effects that come with Erythromycin can include:

Contact your doctor if you experience any of the above.

In rare cases, it is possible to have a severe allergic reaction to Erythromycin.

You should either go to A&E or call 999 straight away if you get any of the following symptoms:

You may be having a severe allergic reaction and require immediate treatment in hospital.

These lists might not be exhaustive. Always read the patient information leaflet for full details on side effects. Please speak to your doctor or pharmacist if you are concerned about getting side effects from Erythromycin tablets.

Before you take Erythromycin, it is important to inform your doctor or pharmacist if you are already taking any other form of medication; this includes prescription and non-prescription medicine, herbal remedies, vitamins and supplements.

For more information on medicines that interact with Erythromycin.

If you suffer from myasthenia gravis or any other health conditions, you should speak to your doctor before using Erythromycin.

If you suffer from blurred vision or any visual impairments, you should not drive, cycle or operate machinery until you feel better.

Always read the patient information leaflet thoroughly for full details on warnings and precautions. If you have any questions or concerns, we strongly advise you to speak to your doctor.

Women should not use Erythromycin while pregnant unless it has been prescribed by a doctor.

Speak to your doctor before taking this medication if you are pregnant, think you might be pregnant, are trying for a baby, or are breastfeeding.

If you are pregnant and have the sexually transmitted infection syphilis, Erythromycin may not be effective at preventing the transfer of this infection to your unborn child. Read more on taking Erythromycin during pregnacy and breastfeeding.

The main active ingredient within this medicine is: Erythromycin 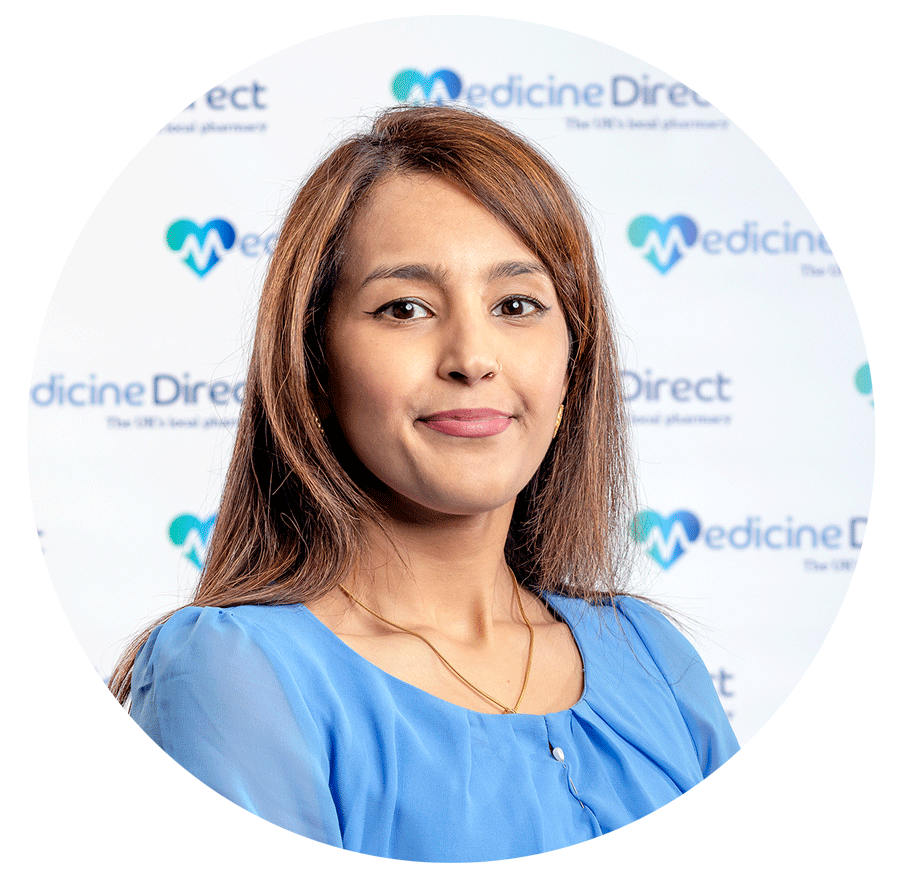